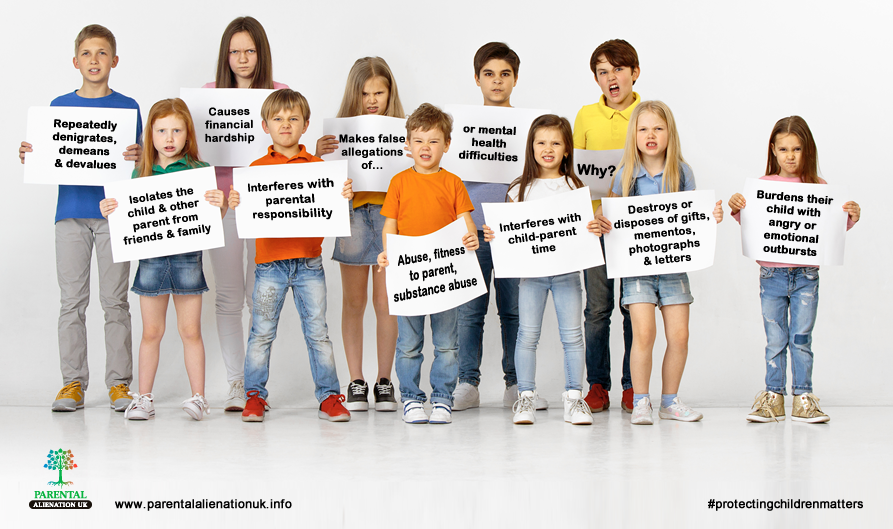 Today, the 5th January, during the second reading of our new Domestic Abuse Bill, Sophie Francis Cranfield from the Womens Federation England will be making representation in the House of Lords for the ‘removal of presumption of contact’.

On face value, no one would disagree it is imperative to protect children from abuse. As a survivor of almost life-ending abuse, I sought supervised contact only, so understand more innately than most how imperative it is that we protect vulnerable children.

Where this proposal becomes extremely dangerous is when it is aligned with the proposition that ‘abuse is gendered’. (i.e only affects women). This is NOT a proposition borne out by facts. The UK Statistics Authority has issued two warnings to that effect.

The number of male victims would fill up Wembley Stadium to full capacity nine times over. They are three times less likely to report for fear of being mocked or disbelieved. Vast swathes of scientific, peer reviewed research shows almost symmetry in intimate partner violence (IPV).

It is not, nor ever has been, a gendered crime based on ‘patriarchal oppression’. The legendary Erin Pizzey who started the first refuge in 1971 tells us this. Out of the first hundred women through her doors – 62 WERE AS VIOLENT as the men they had left behind, if not more so.

If DA is made into a gendered crime, it will increase risk to children. If the presumption of contact is removed based on false allegations – of which there are many – a protective layer of love and nurture will be removed from children.

According to Serious Case Reviews (culpable child homicides) more mothers have killed their children than biological fathers. It’s the same picture in other countries. Does that make mothers dangerous? Of course not. The majority of mothers as well as fathers are safe, protective parents and the best resource any child has to live their best lives.

The media narrative, however, has been primarily based around abusive fathers. Social workers and judges are being trained with this false narrative central to discourse. Falsehood has been repeated so often it is accepted as truth.

The evidence is readily available and it is essential those in the House of Lords have undertaken due dilligence to fact check all narrative and understand the dire consequences for our future generation – our children – if they get this wrong.

Separation from parents is the biggest cause of ‘Adverse Childhood Experience’ – more so even than domestic abuse.

While it is critical we remove children from any proven abuse, it is equally critical we do not literally throw the baby out with the proverbial bath water.

It is essential the House of Lords recognise the behaviours of parental alienation which are, in themselves psychologically abusive and coercively controlling. Look at the picture and tell us it is not.

Evolution equips and programs children and parents to stay close. Attachment neurocircuits are hard wired into our nervous and threat responses. Pleasure neurochemicals (i.e. oxytocin and dopamine) are released within secure attachments. Toxic stress chemicals such as cortisol are released when attachments are insecure, disrupted by threat of, or actual loss via separation, or there’s otherwise too little time together to satisfy mutual needs. Separated children may experience fear and trauma from irresolvable loss, compromising their healthy brain development. Things may stay that way until their predicament is resolved by effective and lasting reunification between attachment figures. Meanwhile, higher cognitive functions are undermined in children alienated during painful separations, enabling psychological deterioration, and denying self-resolution. (source from Professor Dan Spiel 2009) 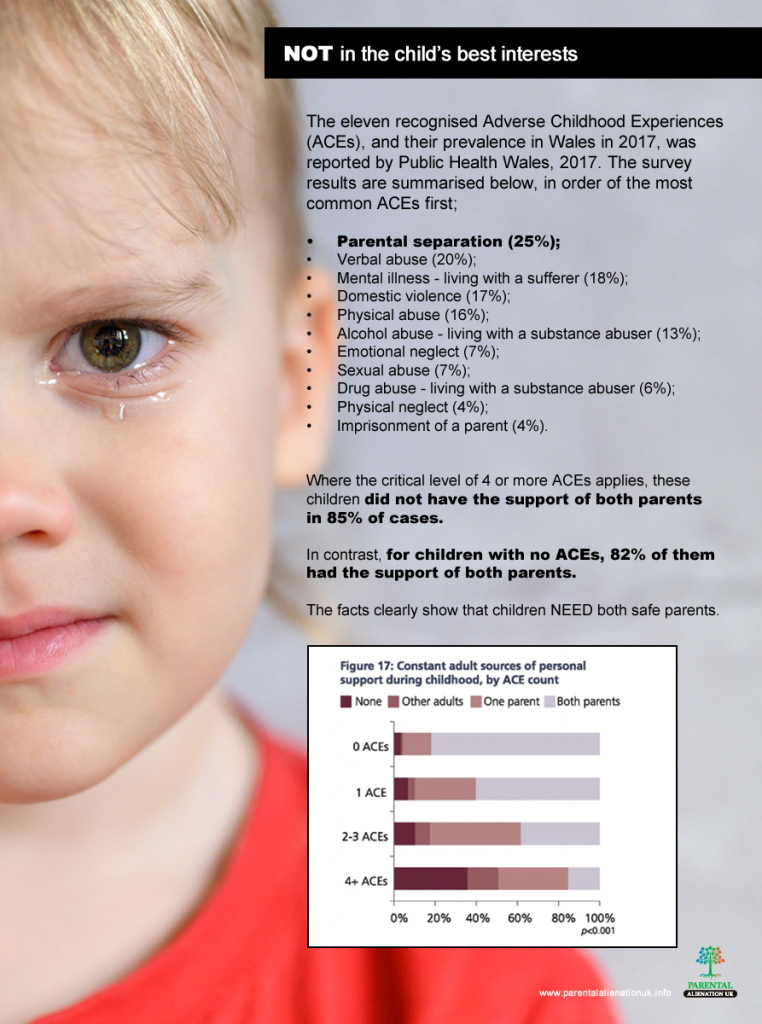 Take a close look at this quote from Dr Adrienne Barnett who now sits on the Cafcass Research Advisory Committee and see the gender bias in action. What she is referencing IS parental alienation. It is undoubtedly a ‘strategy of domestic abuse’ and if parental alienation fails to be included centrally within this Bill, it will have failed our children. 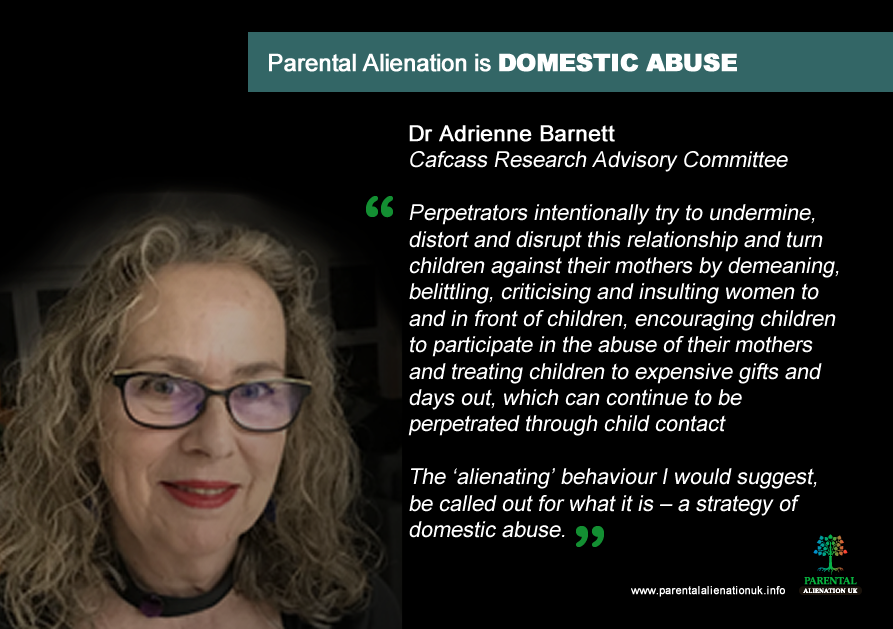 Our children deserve full protection. If we do not protect all the children of male victims or recognise the immense psychological harm caused by parental alienating behaviours, we will have seriously failed them. 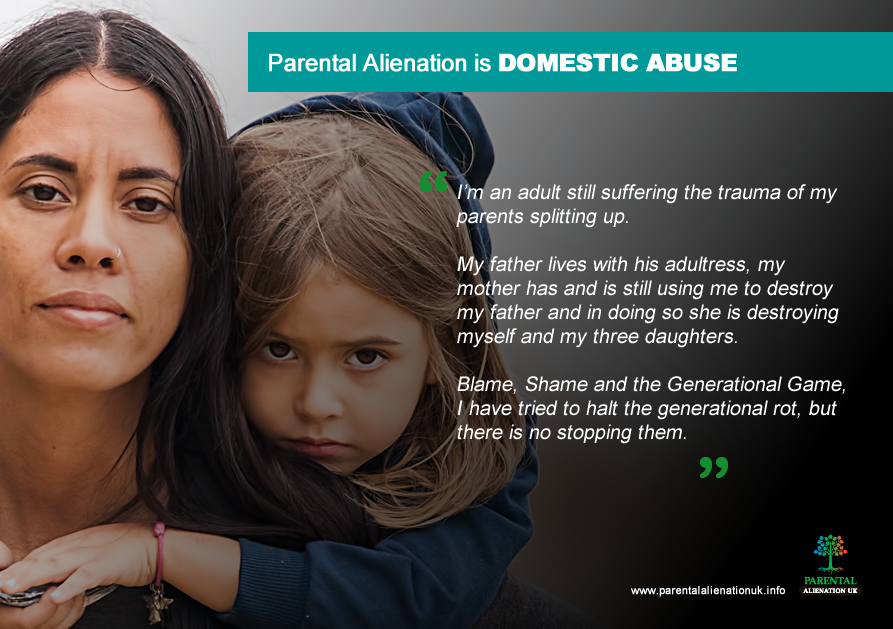