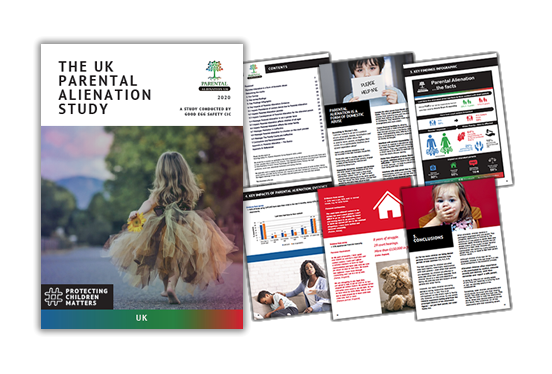 20 Jan Feedback on the Good Egg Safety Study, from a parent who was successful in protecting their child. How many can’t afford to?

“I received a copy of the UK Parental Alienation Study in 2020 and this was particularly helpful and insightful in going over the issues that occur in a breakdown of the relationship between a child and a parent.

Examples covered include; Isolating of a child from the other parent; the interference of child-parent time, the interference with Parental responsibility and false allegations of fitness to parent as well as many others.

With this in mind, from my own experience as well as talking to others who were in the same position, many parents are stuck in the system where one parent is deliberately sabotaging a relationship between a child and parent.

This is highlighted in the study and one of the many examples such as where there can be a clear deliberate action by one of the parents to alienate. It appears this is often the case when the main residence of the child with one parent and not the other. The short term, mid term and long term effects with the Alienated parent and child is profoundly damaging.

Once the process is complete going down the legal route, the Alienated parent then has to try and unravel the damage that has been created.

Many who cannot afford the legal route can often find themselves completely cut off from the child. This is a deliberate action by the Alienator.

The study covers the rationale that both parents can create a safe loving environment which will enable the child to go on and develop into someone who is able to bond and embrace with both sets of parents and know that both are providing care and love that the child deserves.

Statements and studies also completed by the Royal College of Psychiatrists demonstrate that when parents are separated, the child can be torn between two parents. Children can have a sense of loss, the child may also be angry at both parents due to the parental breakdown.

Therefore, if one parent is using these feelings against another parent to sabotage and deliberately breakdown the relationship with the parent who may not be present or indeed not provide the main residence, the link is clear.

Other evidence presented by the R.C. PSYCH also demonstrated there could be behavioural issues and long term effects on the child as a result of separation. These include issues where the child or children may become insecure and other issues may manifest in the form of bad behavioral problems.

The UK Alienation study is a guide that should be used – alongside other information – which every family lawyer and family judge should become familiar with. Many of the issues they face in family issues will resonate within this study.

A loving parent would stop if they are able to recognise these actions.

Both sets of parents deserve the right to parent without fear of deliberate sabotage. It is high time the courts recognised the true insidious deliberate nature of parental alienation.

I, for one, laud the study and welcome further studies into this topic. There are many parents out there who will feel they have nowhere to go. It is the duty of the family courts to ensure both parents have a voice and are able to provide the love the child deserves.

There are also real examples where the alienation is so bad, one parent feels they have nowhere to go and no one will listen to them. They will often seek medical help and psychological help on an issue that was caused deliberately.

Some parents may also find themselves in a position where they may wish to cause harm to themselves.