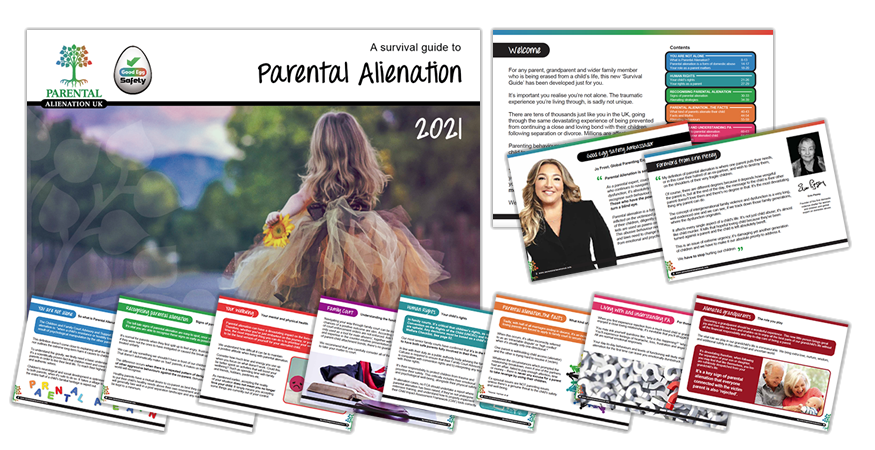 Leading child safety campaigner, Good Egg Safety CIC, has today launched a new publication to provide support and assistance to parents, grandparents and wider family members who have been emotionally cut off from their children following separation or divorce.

It follows a study undertaken last year which generated over fifteen hundred responses and laid bare for the first time the devastation, financial ruin, and mental health issues many have suffered as a result.

Key findings from the survey were:

Global parenting expert and family advocate Jo Frost, who is supporting this new campaign to protect children said: “Parental alienation is a form of domestic abuse inflicted on the victimised parent by the ‘use’ of their children, diligently calculated and the kids are used as pawns on the chess board of life. This abusive behaviour needs to be recognised and laws need to change to protect these children from emotional and psychological abuse.

Children are torn emotionally, gaslighted mentally and repeatedly put in a position which betrays their own genuine heartfelt emotions. To “survive” and stay “safe”, they reject their other loving parent and extended family, as a coping mechanism.

This behaviour over months and often years, leads to detrimental mental health issues and trauma for the child that will, and does, have an adverse impact on their entire lives.

The narrative at present is polarising, creating a gender war to distract from where the focus should really be… the child.

Just because we cannot see it physically, it does not mean it’s not happening. I ask those who deny its reality to re-evaluate their mindset on this urgent issue.

“This is where one parent puts their needs, or in this case their hatred of an ex-partner, and wish to destroy them, on the shoulders of their very fragile children.

Of course, there are different degrees because it depends how vengeful the parent is, but at the end of the day, the message to the child is their other parent does not love them and there is no degree in that. It is the most devastating thing any parent can do. It affects every single aspect of a child’s life.

It is not just child abuse; it is almost like child murder. It kills that hopeful loving child because they have been turned against a parent and the child is left absolutely bereft. This is an issue of extreme urgency; it is damaging yet another generation of children and we have to make it our absolute priority to address it. We have to stop hurting our children.”

We find it incomprehensible that the psychological abuse and coercive control of victim parents and, most especially their children, has remained hidden and suppressed for so long in the UK.

Our survey was designed by an independent qualified researcher and the raw data analysed at source by a lead academic Professor and Child Psychologist. Their names remain unpublished to protect them from the inevitable abuse Good Egg Safety subsequently received for standing up for victims and children of alienation.

The sheer volume of respondents to our survey was alarming and took us by surprise. As did the high number of victim mothers as well as fathers and wider family members. They all suffered similar patterns of abuse, irrespective of whether they were victim mothers or fathers. This is not, nor ever has been, a gender issue. It’s a mental health one leading directly to an urgent child protection one, and demands an urgent Government resolution”